One of the coolest aspects of the Pokémon 20th celebration is the opportunity to have some Mythical Pokémon join your team. You may have already received a special Manaphy during June or the rare Shaymin that was available during July. As the Pokémon 20th celebration continues in August, the unbelievably powerful Arceus will be available for a limited time at participating stores.

But first, here is some important information about an item that is crucial for bringing out the full power of these Pokémon that you may remember from our first article.

You Still Need a Little Heart

The Mythical Pokémon distributed as part of the 20th celebration are incredibly rare—so rare that players aren’t allowed to use them in the Video Game Championships or most Pokémon Global Link tournaments. Mythical Pokémon are quite powerful in battle, and they can all be a great help in your adventures, too. Regardless of how you plan to train your Pokémon, one of the first things you’ll probably want to do is teach them some of your favorite moves.

Each Mythical Pokémon starts out knowing the moves they knew when they first appeared. Plus, they all start at Lv. 100, so they’re sure to be helpful as you continue your adventures. Since they are already at the highest level, they can’t naturally learn the moves they would normally learn by leveling up. Don’t worry—you can still teach them the moves they’ve could have known at any stage of their training. If you find a Heart Scale, you can bring it to the Pokémon Move Maniac in Fallarbor Town in Pokémon Omega Ruby and Pokémon Alpha Sapphire, or Madam Reminder in Dendemille Town in Pokémon X and Pokémon Y, to learn the moves these Pokémon could have learned while leveling up. Each of these Pokémon can learn some really uncommon moves, so it’s worth the effort to help them remember! 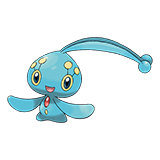 Manaphy has the same stat distribution as most other Mythical Pokémon, with its stats being equal across the board. But Manaphy functions very differently in battle than other Mythical Pokémon due to a couple of interesting tricks. It’s one of the few Pokémon that can learn the move Tail Glow, which increases its Sp. Atk by 3. Manaphy’s Ability, Hydration, allows it to instantly recover from any status condition while rain or heavy rain is falling on the field. Hydration is a little too niche to base a strategy around, but if you’re using Rain Dance or another Pokémon’s Drizzle Ability as part of your team, consider teaching Manaphy Rest. Hydration will remove the Sleep status condition at the end of the turn as long as the rain weather condition is in effect, allowing Manaphy to restore all of its health in a single turn without wasting turns in dreamland.

If you’re looking to make the most of Manaphy’s unique strengths, you’ll probably want to base your strategy around the special Tail Glow move it’ll know when you receive it. Increasing Manaphy’s Sp. Atk by 3 in a single turn with Tail Glow allows Manaphy to quickly dish out massive damage. You’ll get the best performance from a Manaphy that has a Timid Nature and training in Speed and Sp. Atk to help it attack quickly after using Tail Glow, but these tactics will be effective for any Manaphy.

To take advantage of Tail Glow’s Sp. Atk boost, you’ll want to teach Manaphy some powerful special attacks. Scald is a powerful and accurate Water-type attack, and since it can also inflict the Burned status condition on its target, teaching Manaphy Scald is usually the best choice. But if you want more power from your Water-type move you could teach Manaphy Hydro Pump instead, or you could teach it Surf to hit both opponents (and your teammate!) in a Double Battle. Most Trainers teach Manaphy Ice Beam so that it can deal more damage to the Dragon-type Pokémon that resist its Water-type attacks. In a Single Battle, you might want to complete Manaphy’s move set with Energy Ball to deal more damage to other Water-type Pokémon, but in a Double Battle, you’ll probably want Manaphy to be able to defend itself with Protect instead. 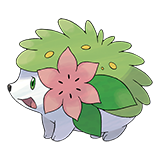 What sets Shaymin apart from other Mythical Pokémon is its trademark Seed Flare move and its two different Formes. When you receive Shaymin, it’ll be in its Land Forme. Regardless of which Forme you plan to add to your team, you’ll probably want a Shaymin with a Timid or Modest Nature that has training in Sp. Atk and Speed to optimize Shaymin’s offensive potential.

While most Trainers prefer not to take Shaymin’s Land Forme to battle, it has some unique traits that differentiate it from its Sky Forme. Land Forme has the balanced stat spread typical of Mythical Pokémon and few weaknesses as a pure Grass-type Pokémon, which allows it to be a sturdier alternative to its Sky Forme. The drawbacks of Land Forme are that it doesn’t excel in any stat categories and it doesn’t learn a wide variety of moves. But its trademark move, Seed Flare, is devastating. With 120 base power and a 40% chance to lower the target’s Sp. Def by 2, few Pokémon can take a repeated beating from Shaymin. As for the rest of Shaymin’s moves, Earth Power is a powerful option for Shaymin’s next attack to help with Steel-type Pokémon, but you may have trouble finding situations to use other potential attacks like Dazzling Gleam (which helps against Dragon-type Pokémon), Psychic, or Air Slash if your Shaymin doesn’t have a useful Hidden Power. For another move option, one great trick is to teach Land Forme Shaymin Rest, as the Sleep status condition Rest inflicts will be removed by the Natural Cure Ability when Shaymin switches out of battle.

Shaymin is much more formidable in its Sky Forme, which you can acquire by exposing Shaymin to a Gracidea. But remember, Shaymin will revert to its original Forme when you place it in your Battle Box, so you can’t use Shaymin’s Sky Forme in any Pokémon Global Link Online Competitions where Mythical Pokémon are permitted. In its Sky Forme, Shaymin becomes a Flying- and Grass-type Pokémon, and its Ability changes to the extremely powerful Serene Grace, which doubles the chance of the added effect of moves occurring. Shaymin’s stats also change significantly, with its Defense and Sp. Def decreasing in favor of upgrading its Sp. Atk and Speed. Sky Forme’s new stats work very well with two strong held items: the Speed-increasing Choice Scarf and the damage-increasing Life Orb.

Shaymin’s Sky Forme can learn Air Slash through leveling up (but with your new Shaymin you’ll need to use a Heart Scale on the Lv. 100 Shaymin instead), and you’ll definitely want to have your Shaymin learn it if you plan on using Sky Forme in battle. Thanks to Serene Grace, Air Slash has a staggering 60% chance to cause its target to flinch, and thanks to Shaymin’s sky-high Sp. Atk and Speed, it can easily pick up a knockout on most Pokémon with the help of a flinch or two. Sky Forme Shaymin can also still use the powerful Seed Flare (which now has an 80% chance to lower the target’s Sp. Def by 2), allowing it to easily dispatch the many stout Water-type Pokémon that might have been able to weather the storm from Air Slash. Both of these moves are resisted by Steel-type Pokémon, so you may want to consider having a Move Tutor teach Shaymin a coverage move in the Ground-type Earth Power. Shaymin can’t learn too many other powerful attacking moves, so you may want to teach your Shaymin Hidden Power if it brings out a useful type like Ice or Fire. A combination of Substitute and Leech Seed, the selfless Healing Wish, Grass Whistle, or Protect in Double Battles are all also worthy options. 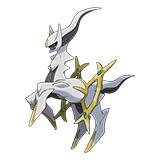 You won’t want to miss your opportunity to acquire Arceus in August. Arceus has the highest stats of any Pokémon, and by holding the various Plate items, Arceus can become any type in the game. With so many options, we can’t possibly go over every solid strategy for Arceus. Just remember that Arceus’s type and trademark Judgment move change to match the type of Plate Arceus is holding, so you can customize your Arceus to fit your needs.

If you give Arceus a Plate to hold, you’ll probably want to teach it Judgment, too. Judgement is one of the strongest moves in the game. It has 100 base power, its type changes to match the type of the Plate Arceus is holding, and it has perfect accuracy under normal conditions. The move Recover often synergizes well with the other moves that are taught to Arceus. Combining Judgement and Recover can enable Arceus to slowly wear down foes by restoring its health and executing accurate, powerful attacks. Some players like to teach their Arceus Toxic to slowly wear down foes while healing itself with Recover, while others teach Arceus Calm Mind and try to slowly become unstoppable with Judgment and Recover. Arceus is one of the most flexible Pokémon, so it’s a great Pokémon to discover your own strategies with. Since Judgment is a special attack, this is a great strategy for Arceus with Timid, Modest, Bold, or Calm Natures.

One type of Arceus that typically doesn’t use its trademark Judgment move is the Normal-type Arceus. Not only can Arceus use any held item it wants while in its original Forme (you’ll probably want a Life Orb), but it also gets the same-type attack bonus from Extreme Speed as a Normal-type Pokémon. Arceus can also learn Swords Dance from a TM, which increases its Attack by 2. After the bonuses from Life Orb, Swords Dance, and from being a Normal-type Pokémon, Arceus’s Extreme Speed will do an incredible amount of damage with vastly increased priority. You’ll probably want to teach Arceus some moves to help with Pokémon that resist the Normal-type Extreme Speed, such as Shadow Claw to damage Ghost-type Pokémon and Earthquake to damage Steel-type Pokémon. Training your Arceus this way is a great choice if your Arceus has a Jolly or Adamant Nature.

Arceus marks the eighth Mythical Pokémon from the 20th celebration, but the year is far from over! Keep watching the Pokémon 20th celebration website andPokemon.com to learn about future Pokémon distributions. The Pokémon Global Link also sometimes gives away special Pokémon to competitors. You can get a special N’s Darmanitan if you participate in the Unova Classic, so don’t forget to sign up. And remember to check out Pokemon.com/Strategy to find all the most recent strategy content and tournament coverage.